Before saving pumpkin seeds, you'll first need to make sure you are dealing with an open-pollinated or non-hybrid variety, otherwise known as an heirloom. If you save seeds from a hybrid variety and replant them, you likely won't get many pumpkins. Most of the time, the result is a lush plant that doesn't produce much. If it does produce fruit, you probably won't be happy with the size or quality. There are several varieties of heirloom pumpkins commonly available. For eating, Small Sugar Pumpkins are probably the most common. For a larger, more universal variety that can be carved or eaten, Connecticut Field is probably the most common heirloom variety. For giant pumpkins, the Atlantic Giant heirloom variety is probably the most widely grown. There are also other, less common heirloom pumpkin varieties that can be found online or in seed catalogs. 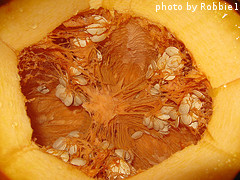 Once you know you have an heirloom variety, the next step is to harvest the seeds. If you are saving pumpkin seeds, t's best to wait for the pumpkin to fully mature and then some before you remove it from the vine. Typically, if you are harvesting seeds from a pumpkin, you want it to be over-ripe, to the point where it is soft and mostly inedible. The reason for this is that you want the seeds to be fully developed and mature. Most of the time the seeds you find in a perfectly ripe pumpkin are still a bit immature. When in doubt, let the pumpkin mature further on the vine and then let it sit in a shady, dry spot for another couple of weeks before slicing it open.

Once you have an over-ripe heirloom pumpkin, cut it open and scoop out the seeds and put them in an empty bowl. Using your fingers, remove most of the pulp from the seeds. Then, fill  up the bowl with water and let the seeds settle for a few minutes. The healthy, viable seeds will sink to the bottom and the dead seeds and most of the pulp will float to the surface. When the seeds and pulp have separated themselves, use a slotted spoon to remove the dead seeds and pulp. Then you can put the good seeds on a paper towel to drain. Once most of the moisture is off, the seeds should be creamy white and ready for drying.

The next step in saving pumpkin seeds is to dry them out a bit. There's a couple of ways you can do this. We've found the easiest way is in a conventional oven. First, spread the seeds in a single layer on a baking sheet. Place the baking sheet on the middle rack of your oven, close the door and turn on the oven light. DO NOT TURN ON THE OVEN. The ambient heat from the light is enough to dry out the seeds in about 36-48 hours. When they are dried enough, the seeds will be harder, more brittle and they'll have shrunk a little bit. You can then put the seeds inside an envelope and store them in a jar in your refrigerator. Make sure you label the envelope so you know what seeds it contains. If you are saving lots of different seeds, several envelopes can fit inside one, quart-sized jar. It's also a good idea to put a tablespoon of dry rice at the bottom of the jar just to absorb any moisture.

A third option for saving pumpkin seeds is just letting them air dry. Spread them in a single layer on a baking sheet or foil and put them in a dry place, preferably away from the humidity of a kitchen. In most cases, the seeds will dry out enough in a few days. Again, you want them to harden up and shrink a little bit.

Click on the following links to learn more about growing pumpkins. 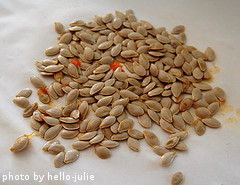 Click here for information about watering and fertilizing pumpkins